LifeFlight Eagle Flight Nurse Sean Gooding, 52, passed away in January 2022 after a long battle with melanoma. 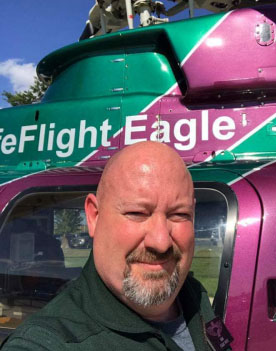 Sean spent his entire career serving the community, where his dedication benefitted countless patients. Sean first worked as an EMT starting in 1988, and later worked as a firefighter/paramedic in Lawrence, KS, before taking his first flight paramedic position in Lawrence. After attending nursing school, he went on to work as a nurse at hospitals and flight programs in South Dakota and Oregon before returning to Kansas.

Sean joined LifeFlight Eagle in 2016, where he worked full time at our Harrisonville base. He later switched to PRN after taking a leadership position at a community hospital in eastern Kansas.

Our hearts go out to Sean’s family and loved ones—especially his two sons, ages 23 and 21, and daughter, 17. Please join us in keeping them in your thoughts and prayers. You can read his obituary here.

If you are interested in contributing to the Sean Gooding Memorial Scholarship Fund, we invite you to click here.