Charles Braithwait was always on time. That's why his wife, Sandra, was worried when he was several minutes late to pick her up for an after-work dinner date.

After waiting several minutes, she called his cell phone.

"He'd been trying to get his phone out of his pocket. He said 'Sandra, come quickly — I'm sick." 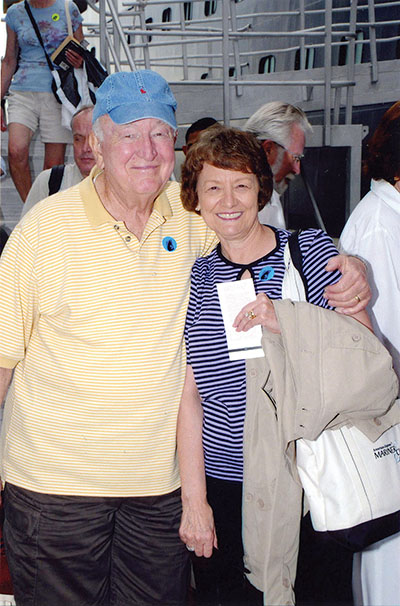 Sandra rushed out of the building and found Charles slumped over the wheel of his car in the middle of the parking lot at Truman Regional Education Center in Clinton, where Sandra had just finished teaching an evening class.

"When I got to him he was absolutely white as a sheet. He had the door open on his side and the seatbelt was holding him in. He was grasping his chest with both hands."

"I could see that we were in big trouble."

A young woman who was running late to class saw what was happening and stopped to help. She called 911 and an ambulance crew quickly arrived and began evaluating Charles.

Sandra remembers that within minutes of arriving, one of the medical personnel made a phone call: "We need the bird."

Golden Valley EMS personnel recognized that Charles had a substantial blockage in his heart. His artery needed to be opened as soon as possible in order to save his life and prevent permanent damage to the heart muscle. The only places that can do that procedure are large hospitals with a specialized Cardiac Catheterization Lab.

Time was of the essence.

Because Charles' cardiologist was located at Mercy Hospital in Springfield, the Braithwaits asked that he be taken there.

They administered oxygen and gave him nitroglycerin and morphine to reduce his pain, which in turn reduced the stress on his heart.

"He was a very sick gentleman," Cowick said. "We try to relieve all of their chest pain if we can. We had to give him quite a bit of medicine to get him comfortable."

Cowick said they constantly monitored his EKG to see if there were any changes en route to the hospital.

Charles remained conscious throughout the flight, and remembers the team's calm professionalism and how reassuring it was.

"They talked to me, calmed me down as much as they could. Between the medicine and them talking, it relieved me considerably. I began to relax and have a little more encouragement that things were going to be alright."

One of the most important things they did was communicate with the receiving hospital en route.

"We relay information to the hospital in advance so they have plenty of time to get the Cath Lab set up and people ready to receive the patient as soon as we land," he said.

Despite a stiff headwind, the helicopter arrived at Mercy Hospital in Springfield 48 minutes after lifting off from Clinton — a trip that would have taken an hour and 40 minutes by ground ambulance.

Sandra was still driving toward Springfield when she received a call from flight nurse Goucher telling her that the helicopter had arrived with Charles at the hospital, and that he was being treated by specialists in the Cath Lab.

By the time she arrived at the hospital, the cardiologist came out and told her that Charles was doing well after they put several stents in his blocked arteries.

"He told us that if there had been a 10 minute delay anywhere along the line, we might have a different outcome," she said.

Charles agreed. "Had we not been on the helicopter, I don't know what would have happened. But I know there would have been major damage to my heart, which did not happen."

Because he received the appropriate high-level medical attention he needed in time to save his life and prevent permanent heart damage, Charles is able to do most anything he wants.

He raises a few cattle, and continues his life-long goal of helping others.

"He's always had a passionate zeal to help those who are trying and struggling to find a place in the American dream for themselves," Sandra said. "The work he's done has been very instrumental in trying to help people become a part of mainstream of life."

The following spring, they traveled to Washington D.C., where Charles, a retired non-profit executive, was honored for his 50 years of service in community action initiatives, and was personally recognized by Speaker of the House Nancy Pelosi for his work.

"It was really neat," said Sandra, who retired as superintendent of Clinton Public Schools in 2001 and now teaches college classes and supervises student teachers.

"He also got to cross something off his bucket list because of LifeFlight," Sandra said.

A few months after his heart attack, the couple sailed around Cape Horn in South America. They've now expanded their bucket list and set their sights on other cruising destinations — Asia, the Orient and New Zealand, as well as travel in the U.S.

The Braithwaits said they feel like they've been given a new lease on life.

"I'm pleased and very, very thankful that we've been given more time here to do the things that we think are important in life," Charles said.
Sandra said she was grateful to the ambulance crew as well as the LifeFlight Eagle team.

"I'm so thankful that first of all there was a LifeFlight, that the medical personnel understood the situation and knew what to do and to get us help in the best way possible," said Sandra.

"We go by the helicopter base on Highway 7 almost every day. I never fail to look over there and be very, very thankful that it was there."