Cleatus Burnine was feeling achy and sore like he was coming down with the flu, so he went to see his doctor.

Burnine, of Richmond, Mo., said he didn't think much of it when his doctor told him to go to Ray County Memorial Hospital to get an electrocardiograph or an EKG.

"I go regularly to North Kansas City Hospital to get checked out ever since I had my [heart] stents three years ago," Burnine said.

But within minutes of arriving at the hospital, physicians determined that Burnine was in much more immediate peril. 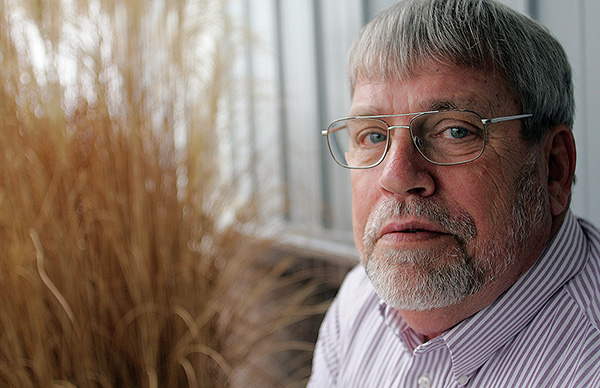 Burnine's heart was in ventricular tachycardia — his heart was beating faster than it should. A heart cannot sustain the rapid, irregular rhythm for long and it can lead to cardiac arrest or sudden death.

Burnine said he remembered lying in the emergency room when the doctors decided to call LifeFlight Eagle to transfer him to North Kansas City Hospital, where he could receive focused treatment from cardiac specialists.

LifeFlight Eagle 3, a Lafayette County-based helicopter and its medical team arrived at the hospital to pick Burnine up within 15 minutes of receiving the call.

Kent Shutt, LifeFlight Eagle flight paramedic, said the hospital and crew initiated a very quick transfer into the helicopter because they knew his heart could not sustain its current rhythm for long.

Within eight minutes of landing, LifeFlight Eagle 3 was airborne and on its way.

Burnine said even though he was anxious because of his medical condition, that he was alert, conscious and enjoyed the trip.

"It was a nice flight, I was able to look out and see things and it was only 16 minutes," Burnine said.

While in flight, a LifeFlight Eagle flight nurse and flight paramedic closely and continuously monitored Burnine's condition using state-of-the-art EKG and other onboard equipment.

Shortly after arriving at North Kansas City Hospital, Burnine's heart succumbed to the rapid, irregular beat, stopping his pulse. Burnine, who was coherent and alert only minutes earlier, took at turn for the worse.

Doctors and the LifeFlight Eagle medical team immediately began giving him CPR and shocked his heart to get it beating again.

After helping stabilize Burnine, the LifeFlight Eagle crew stayed at the hospital to help explain to the family what was happening and to reassure them that the doctors were continuing further treatment.

Flight paramedic Shutt said Burnine's outcome could have been very different had he not been quickly flown by LifeFlight Eagle. The 16-minute flight to a higher-level care facility was a much faster and smoother alternative to a bumpy, nearly hour-long drive in an ambulance.

Fortunately, because of the quick transfer, Burnine suffered cardiac arrest at the hospital where he could receive comprehensive treatment rather than on the road while en route to the hospital.

Now fully recovered from his close call, Burnine gives a lot of credit to LifeFlight Eagle and its medical team, whom he says helped save his life.