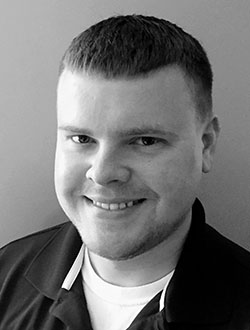 As a child Darrin spent many days with his father at their local volunteer fire station. Here he grew up watching his dad tend to the firetrucks and respond to emergency scenes. This is where he was first instilled with the passion to help others. After graduating from Loogootee High School in 2007 he pursued an Associate’s Degree in Emergency Medical Services from Vincennes University. Earning his EMT-B certification in 2008, he decided to pursue further certification. Just two years later he earned his paramedic license and continued to grow within the EMS community.

During this time, along with working as a paramedic, Darrin also served as a volunteer firefighter, hazardous materials response team member, public safety diver, and an instructor. In 2012 he obtained his Bachelor’s Degree in Homeland Security and Public Safety. Throughout the next few years working as a paramedic he also continued to engross himself into emergency and critical care medicine in order to prepare himself for his pinnacle goal, serving as a flight paramedic. In 2012, he was afforded this opportunity by Air Evac Lifeteam.

While serving in the role of a flight paramedic he has been able to continue to serve his home communities in southwest Indiana as well as new areas within Kentucky. Darrin has served as an instructor and mentor for new employees while working for Air Evac. He was also afforded the opportunity to service as a base clinical lead overseeing outreach education as well as clinical standards for the medical crews at his base of service. Though the role of a flight paramedic was thought to be the highest point to reach in his career, while working within the air medical community he found another area of which he is passionate; safety.

After seeking out those known for their commitment to safety within the air medical industry, Darrin was able to become a contributor and team member of the Association of Air Medical Services (AAMS) Vision Zero Initiative. Here he has written articles and editorials pertaining to safety topics specific to helicopter EMS. Darrin has an ongoing commitment to the safety of all those within the EMS and fire communities.

Darrin’s professional affiliations include, the International Association of Flight and Critical Care Paramedics, National Association of EMT’s, National Registry of EMT’s, and the AAMS Vision Zero Initiative. In combination with these affiliations Darrin is also a proud Eagle Scout. He currently resides in Lake Saint Louis, Missouri. Darrin is currently furthering his education by pursing a degree in nursing in order to advance his clinical knowledge. In his free time, he enjoys exploring new restaurants, reading, and traveling.